Neglected Tropical Disease (NTD) are not rare diseases, but diseases that persist in neglected areas. Most of them are curable diseases, and have diseappeared from developed countries. An introduction of these diseases is made by the Médecins Sans Frontières, and this discussion present the issues around giving help to these regions, notably logistics. In the scientifique publication community, this recent paper on Eliminating the Neglected Tropical Diseases: Translational Science and New Technologies is particularly interesting.

NTD are mainly (but not only) located in tropical countries. I wanted to see which countries were the most affected by these diseases and which diseases were the most widespread. I also used the case of one disease, Lymphatic Filariasis, to find cluster of diseases.

The World Health Organisation lists 17 NTDs in 149 countries. However, not all diseases have global datasets. These datasets contain data of: new cases reported (incidence), cases (prevalence), individuals treated, and deaths in the case of rabies. Some of the NTDs data were more complicated to acquire, so they are not included in this analysis.

Neglected Tropical Diseases (NTDs) are transmitted by flies, rabids, worms, or other people. In the buruli ulcer's case, the cause is even unknown. The consequences range from temporary disabilities (Dracunculiasis) to deaths (rabies). Most are easily cured (e.g. leprosy, rabies), but for some prevention is still difficult (Buruli ulcer).

Some countries have managed to eradicate some NTDs (e.g. Mexico eradicated onchocerciasis), but NTDs are still endemic in many countries. Cutaneous leishmaniasis, also called the Aleppo boil, seem to be coming back in 2016, principally in refugees fleeing Middle Eastern countries.

I downloaded data for 8 NTDs:

This heterogeneity of data types (new cases vs. cases - prevalence vs. incidence) is challenging to compare. However since some NTDs are chronic, others deadly, the measure selected by the WHO is likely to be a fair representation of the issue: e.g. in the case of rabies, which is easy to treat but deadly, a good measure of the issue in a country is the number of deaths rather than affected people. To simplify this analysis, I consider that the way the data was collected reflects a measure of the issue, and so these measures can be compared. However, I'm not an epidemiologist, so ideally I would ask one to know how this can be done.

The WHO data did not use the ISO number for countries, so I looked for geographic world data that represented the 'Country' name in the WHO data. The Natural Earth dataset had fairly similar names. Instead of using the country dataset, I use the sovereign states data, which seemed to fit with WHO data. However, it seems that the state of Tuvalu was lost in the generalisation (since only one of the NTD was recorded in Tuvalu, the issue should be treated in a larger analysis). I also downloaded the dataset of geographic lines which included the Tropics.

The data I downloaded consisted of CSV files, one per disease. Each CSV file included only a selection of sovereign states with data for a selected few years (1990-2015). Missing data was inconsistent: some countries only had 'No data' while others had only '0'; however it was not clear if the "0" referred to missing data or to no data. For instance in Guinea-Bissau, cases of onchocerciasis (river blindness) were as following:

Since the number was pretty consistent over the years, it looks like missing data rather than 0 cases. For this analysis, to simplify, I considered "No data" to be equal to 0.

I used the gdal package to load the shapefiles downloaded at Natural Earth. Shapefiles can be directly imported into R, then you have two entities: the geographic data SpatialPolygonsDataFrame and the "attribute table", available when adding @data to the variable name.

I downloaded the number of cases of all the diseases available on the WHO website. Not all the countries had been spelt the same way, so I first joined the dataframe of the shapefile and the data from WHO to find out which countries did not match:

I changed semi-manually the country names to match the Natural Earth dataset.

Normalise with the population

The population size has a large effect on the number of cases in each country. Although the SMR (Standardised Mortality Ratio) should include the age and gender, here I only used the estimated population from Natural Earth (pop_est). I divided the number of case by the population and multiplied by a million to obtain a number easy to handle.

Considering rabies for instance, normalising by population change the top 3 from:

I used Tableau to visualise change over time. The three graphs below correspond to the countries that have had the most change in the data available: Uganda, Mali, and Benin.

The embedded dashboard is interactive; it is possible to filter by Country, disease, and years to allow more exploration. The legend is also interactive, so click on any disease's name to highlight it.

Countries with the highest count of diseases

Countries are not affected in the same way by NTDs - some have multiple (up to 5), while others are still struggling with just one.

I selected the countries which have more than 3 NTDs, and plotted it on a radar graph to show the number of people recorded with the disease (or death, for rabies) in each country. 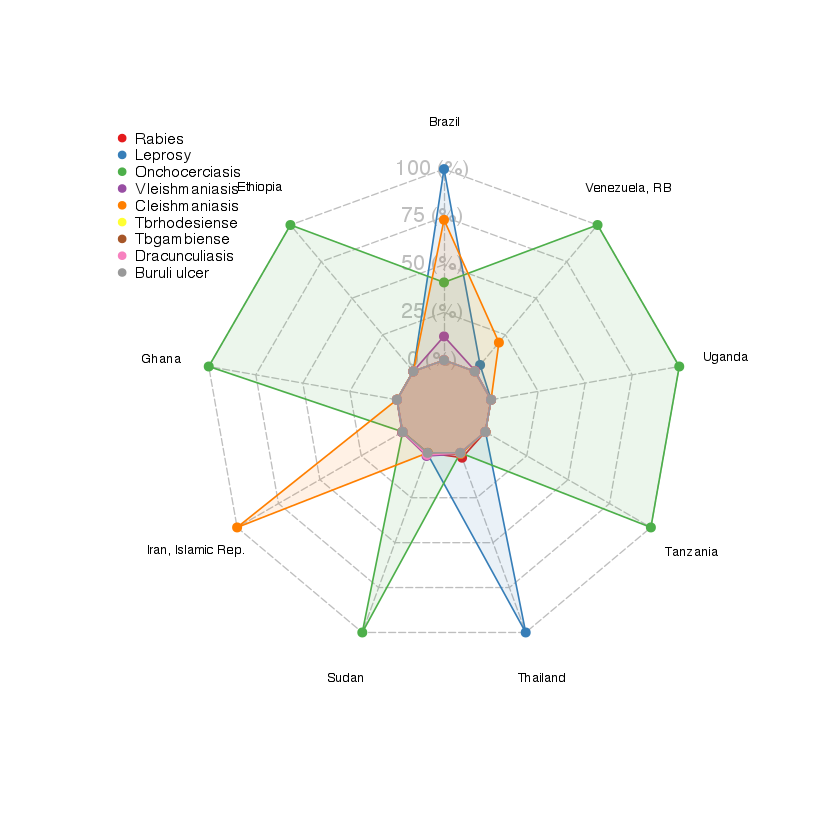 Transmittion of the NTDs varies (see Table 1), but there are constant - for one thing, NTDs are mostly in tropical to subtropical areas. I wanted to find out if there were clusters between the NTDs: are some diseases always occuring together?

I used a data mining technique called 'frequent itemset mining' and used the arules package for R. The package was created to mine 'items' bought together during a 'transaction'. Here the transactions are the countries and the items are the NTDs.

I first ran an 'apriori' rule

to find the frequent NTDs. I obtained the following result:

Finally I ran another 'apriori' rule to find which presence of NTD would imply another one:

The top three association rules are:

The fact that leprosy is such a frequent disease compared to others skews the result, and makes it difficult to see real trend. Besides, many NTDs are missing from this analysis; those for which the data was not easily available. It would have been interesting to include Chagas and the dengue for instance, since they are also widespread.

Number of people infected per country

Looking at the number of people infected per country, we can isolate 14 countries for which 10 to 50% of the population is affected by one NTD. 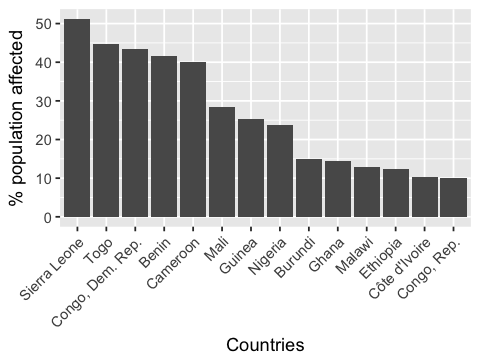 Every country in this top 14 is in Africa! Although Asia and South America are also struggling with NTDs, it seems that most people infected are in Africa.

Statistics for each disease

I ran some simple statistics to find the total number of people affected, the mean, and the standard deviation. For that, I used the ddply package in R.

This resulted in the following table: 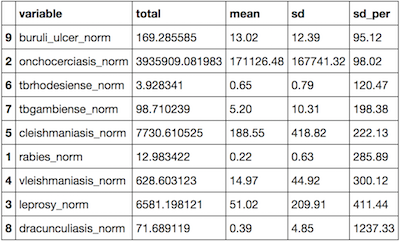 Influence of some economic variables

I used a few economic variables to find if there was a relation between presence of NTDs and GDP, economy, and income grp. These were variables easy to find in the Natural Earth dataset. I used a linear model in a first instance, but there was no significant relationship between the total number of people affected by NTDs in these countries and their income.

Spatial analysis would not be appropriate at the global scale in this case. For instance Cutaneous Leishmaniasis and Visceral Leishmaniasis both occur in Uganda, but in different regions. Trying to apply spatial statistics with global dataset would therefore not be very powerful and a regionalisation of the data is required.

The ntdmap.org website provides with more up-to-date and larger scale data. I downloaded the data for the Lymphatic Filariasis, a parasitic disease transmissible by mosquito bites and resulting in disfuguration so important that it impacts on the social and economique opportunities of those affected.

Mapping a density of points can help finding 'hotspots' where cases of Lymphatic Filariasis are frequent. The package spatstat provides with a simple density function.

Then, by transforming the density into contour lines and keeping the most inner clustered points, we obtain the following map: 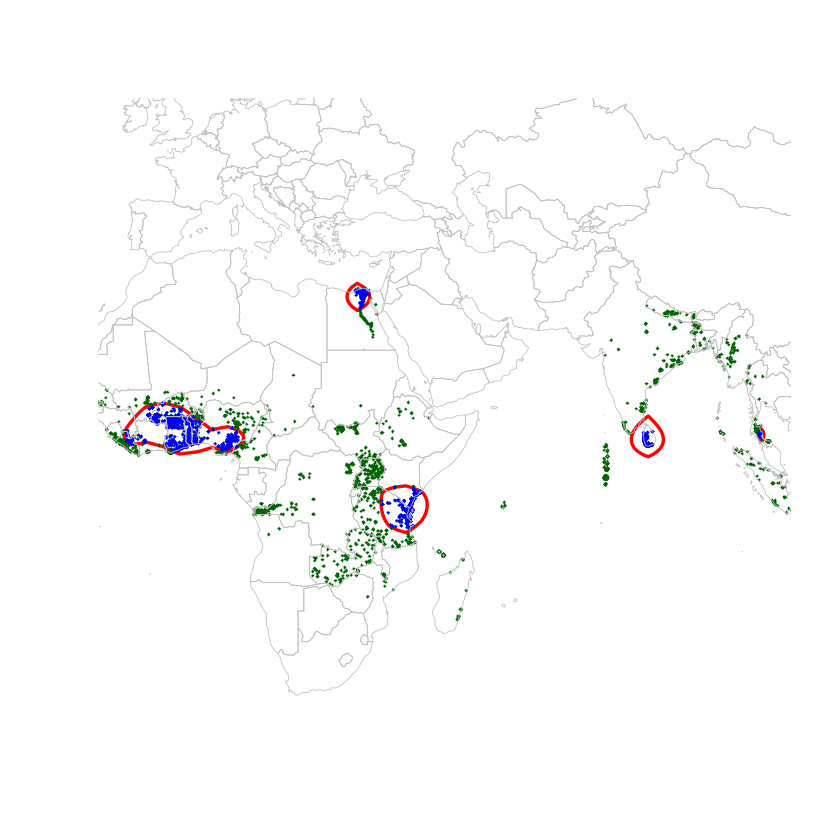 There are 5 clusters, which contain 31% of the points; which means that nearly a third of the cases of Lymphatic Filariasis happens in these countries. Lymphatic Filariasis seems to persist around in Egypt around the Nile (but also where most of the Egyptian population is located? In any case, this cluster is well documented. The Sri Lankan cluster is reported under control. The Zanzibar cluster had thought to be under control, but as found in this paper, there are still cases. The final cluster, which includes Ghana, Togo, and Nigeria especially, have also been going through some mass drug administration. Togo has apparently done real progress in 2013, but 2016 figures seem to suggest otherwise.

I used carto to show the informations I had created. First the data needs to be exported from R to geojson. Then imported in Carto and with a little bit of JavaScript, you obtain a visualisation tool.

Select the data with spdplyr

Convert to geojson with geojsonio

Shapefiles are great for spatial analysis, but when it comes to use spatial data on the web, it's better to use it in a geojson format. It's only one file, and lighter than a shapefile.

Geographic data tends to be quite heavy for browsers, so when possible, it's better to simplify it. In this case, since we don't need a great topological accuracy, we can simplify easily. rmapshaper does this in one line.

I imported the data into Carto. Carto is great place to host geographic data into a spatial database without needing to create a geoserver. Although it would be possible to use the geojson directly into LeafletJS (a simple geo visualisation JavaScript library), using Carto can make data rendering faster (they have optimised the data visualisation), and then it's also easy to manipulate the data in the browser:

I usually use the carto interface to get the values I want and then I write my own JavaScript script to get the visualisation I want. In this case, I wanted to use a choropleth map based, whose scale reflected the data, so I used the jenks scale. The scale updates when the data changes.

Click on the image below to see the interactive map. 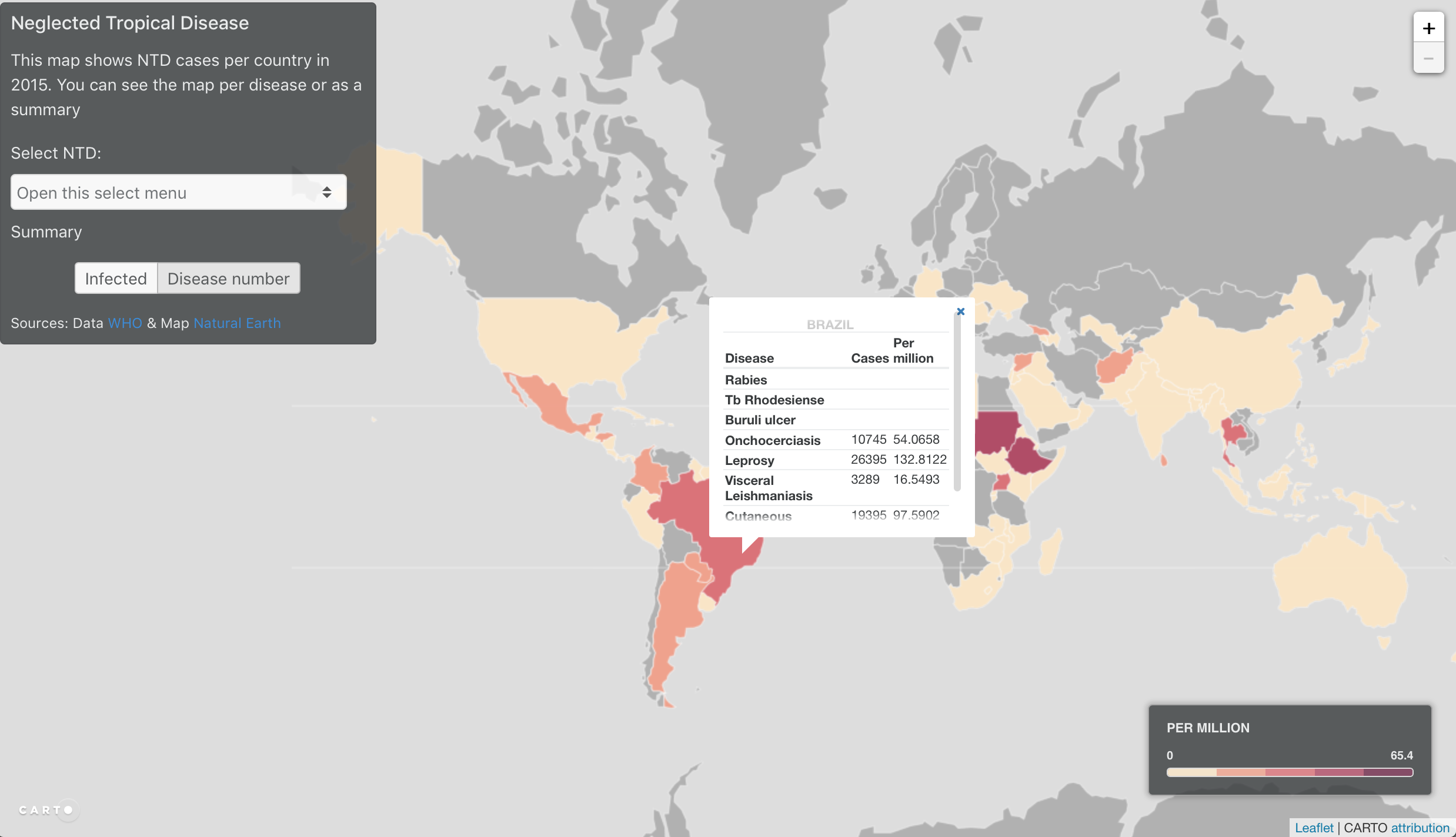